Skip to content
Home/Oncology/Which is Best? Full or Partial Mastectomy?
Previous Next

Which is Best? Full or Partial Mastectomy?

Did you know that in 97-99% of breast cancers, only one breast is directly affected? In other words, breast cancer is most often a unilateral disease. Yet many women choose to have both breasts removed. Why? And are there sound alternatives?

The Search for the Best Treatment in Unilateral Breast Cancer

According to the American Cancer Society, new cases of breast cancer continue to rise in the United States. The good news is though, that the same report showed that death rates are in decline. This good news is largely the result of improved techniques and treatment programs.

Part of the decline is attributed to mastectomies. Many women undergo mastectomies each year to remove the cancer from their breast. Many choose to have both breasts removed rather than just the affected breast. One reason for this choice is fear of the cancer recurring.

Members of Kymera collaborated with researchers in Chicago and from the University of Texas MD Anderson Cancer Center in Houston to study breast cancer surgery outcomes. The study looked at 533 Southeastern New Mexico patients having breast surgery between the years 1989 and 2015. It is hoped that the findings will help continue to improve treatment programs for unilateral breast cancer. 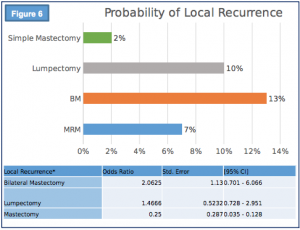 In considering outcomes, the team focused on four key breast cancer surgeries. These are:

Each of these therapeutic measures differ slightly and range from removal of only the affected tissue to removal of both breasts and surrounding tissues.

Not All Mastectomies are Equal Options

When it comes to breast cancer treatment options, best for one person may differ from another. The study findings point to one clear fact: The more extensive the surgery, the higher the long-term risks. In other words, the researchers found that having either a modified radical mastectomy (MRM) or a bilateral mastectomy (BM) increases the potential for post-surgical complications, some of which are serious.

In addition, the researchers found that the complete mastectomy patients had an increased likelihood of lymphedema, often severe and irreversible.

The researchers concluded that although those with a history of cancer or other factors are likely to choose a more aggressive approach, such an approach “must be weighed against the potential problems of surgical complications.” In some cases, the complications may be worse than the alternative.

Such concerns and potential for complications should be one of the key discussions a breast cancer patient should have with her doctor. Before having a complete mastectomy, be sure to have a frank conversation with your doctor.